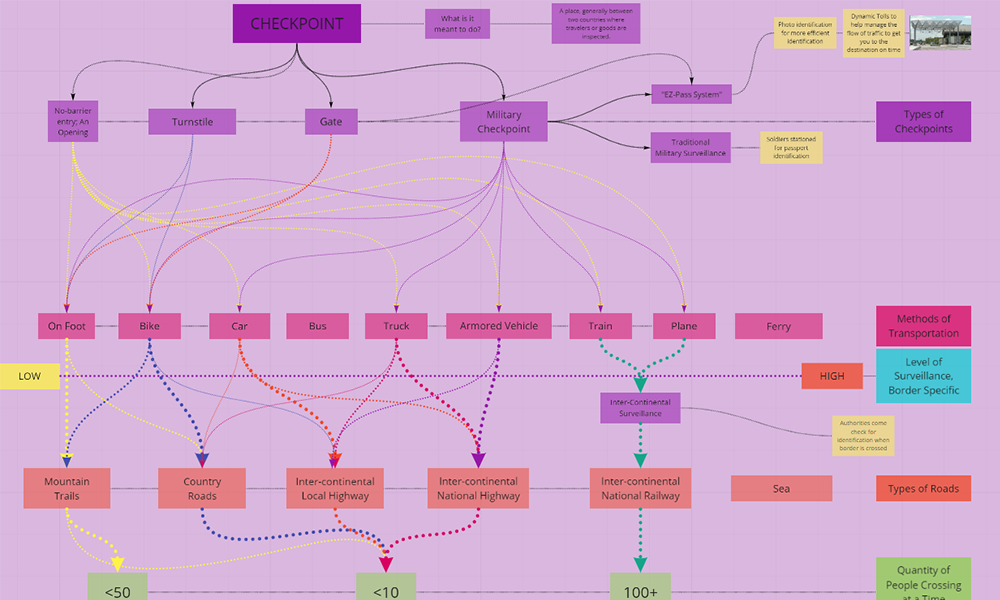 This week was dedicated to breaking down the typology of a checkpoint. What is a checkpoint meant to do? Who is it for? What method of transportation can go through these checkpoints? How many checkpoints are there? What are the specific conditions to this checkpoint in the event that it is situated between the North and South Korean border?

A checkpoint itself is a place, generally between two countries where travelers or goods are inspected. This checkpoint is stressed more depending on the contextual background these two countries. In the case of Berlin, they were divided by their political institutions. In the case of Korea, North and South Korea are both divided due to the resulting conflict of the Korean War. These types of checkpoints take into account the level of surveillance whether it calls for photo identification

Method of Transportation, Types of Roads

The methods for transportation are divided as followed:

These methods are sifted through different kinds of frameworks, whether it’s on the road, on the highway, in the air, or by sea. The scenarios start to differ once you think about the different demands of each methodology. For example, 100 people on foot trying to cross at the same time would project a different scenario or storyboard with just a few people trying to cross the border.

Quantity, Social Classes, and the Division of South and North Korean

As previously mentioned, the quantity of the people travelling leads to drastically different projected scenarios, where less than 10 people would imply a different situation than let’s say, 50 people or 100+ people. When imagining the scenarios of an event at the checkpoint, there is a strict disparity in the kinds of experiences a South Korean would have to try to cross into the North Korean border and vice versa.

This portion of the diagram compares and contrasts the difference in scenarios when applying realistic contextual information regarding how the border is run by the South Koreans and how the border is run by North Korea. The utopian scenarios are what I want in terms of imagining a future post-unification, where everyday activities are implemented when the border is crossed. Everyday interactions are applied as a whole to an otherwise dense physical border meant to separate these two countries.

Comments moving forward included considering the clergy when discussing social classes, and thinking about elaborating on how the number of people from the North Korean side would be in the thousands, whether the reason is festivity, or simply running away from danger. The realistic scenarios need to tease out not only the direction, but meeting of North Korean and South Korean authorities, as well as comparing and contrasting them.