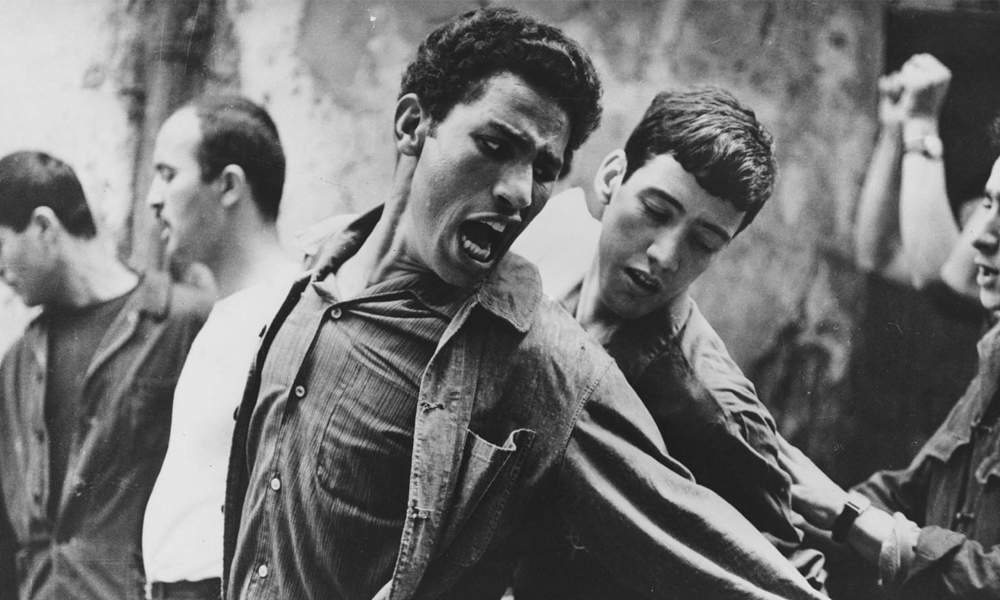 Thinking about the governance of both North and South Korea is crucial to the thesis proposal in terms of how the resulting populace reacts to the set of rules and laws that they are set to follow. I watched a film called the “Battle of Algiers”, where this film revolves around the idea of freedom away from the government occupation and the idea of it being controversial regarding insurgency. 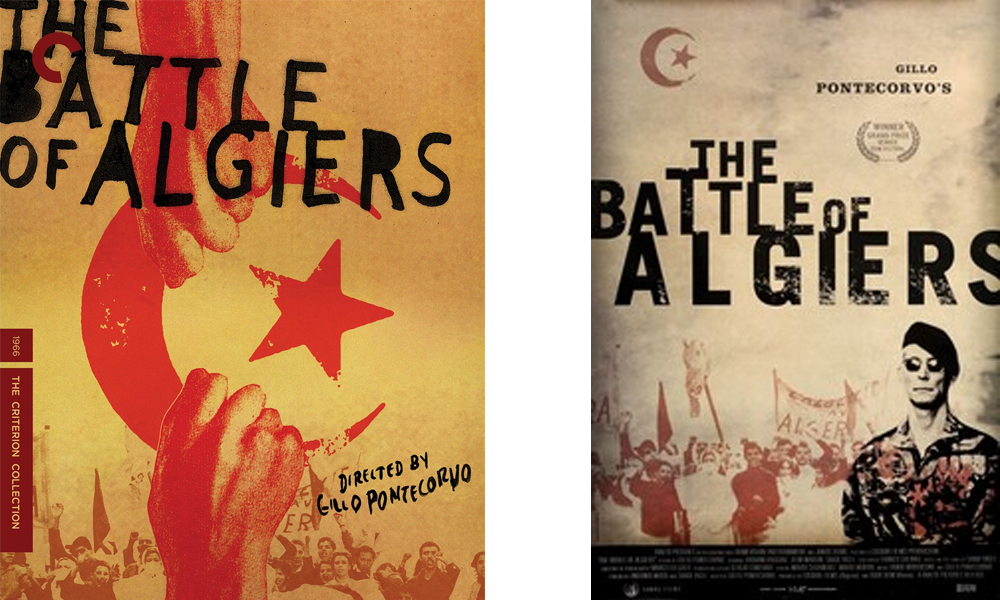 Quick Characteristics Regarding the Film 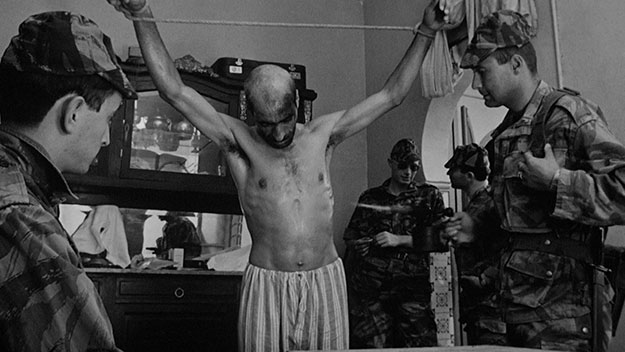 What is this Film About?

Situated in 1966, the Battle of Algiers is an Italian-Algerian historical war film that is based on the events that occurred in the Algerian War against the French government in North Africa. This film is controversially celebrated by insurgent groups as a significant reference to urban guerrilla warfare. The opposition to the French government is referred to as the FLN, or National Liberation Front, and it was developed as a guerilla warfare group through illegal methods. 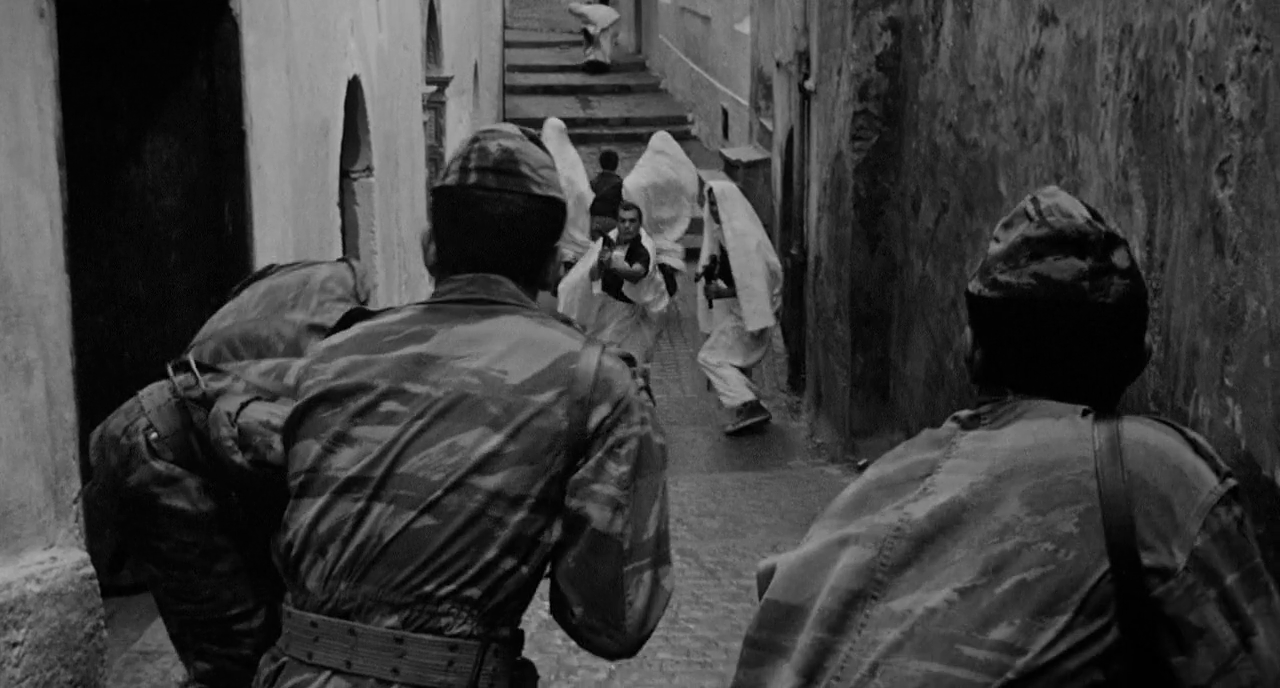 Thinking about the Contrast between Governance and Freedom

As I was watching this film, one big-picture question stuck out to me which caused a war within myself in my contemplation. The overall issue involves:

Contrasting too much freedom, or too little freedom, and how architecture addresses this issue.

When negotiations between the French government and the Algerians failed, Algeria turned to fighting to gain its independence from French occupation through the FLN. This turned into coordinated assassinations on French police officers, until it led to checkpoints, increased discrimination on Arabs/Algerians, and bombings on heavily populated Algerian spaces.

It’s interesting how despite the FLN not agreeing with the occupation of the French government in their land, their go about guerrilla warfare whilst maintaining their own set of rules to keep their own order within their group. They forbid the use of drugs and prostitution to maintain full focus on the task at hand.

When one thinks of the government, the point of the government is to establish order in a society through justified law and enforcement of that law. This includes punishment of the people that break these laws. So what if these laws are not justified? There are without a doubt corrupt people/citizens, but what happens if the government or police officers are corrupt too? An ideal government seeks to protect its people through following their regulations, but what if corrupted individuals get a hold of this power?

Another point to address is this scene in the movie where pedestrians point out the bystander as an Arab that assassinated a police officer while the other officers are running around searching for the perpetrator. He doesn’t know what to do, and ends up running away, alerting the officers into thinking that he is the criminal. They arrest him as the French bystanders in the balconies condemn him. This can be related back to how North Koreans are discriminated in South Korea’s post-modern day society, but they have the luxury of just hiding their identity for the rest of their lives in order to live the remainder of their life as a “South Korean”. 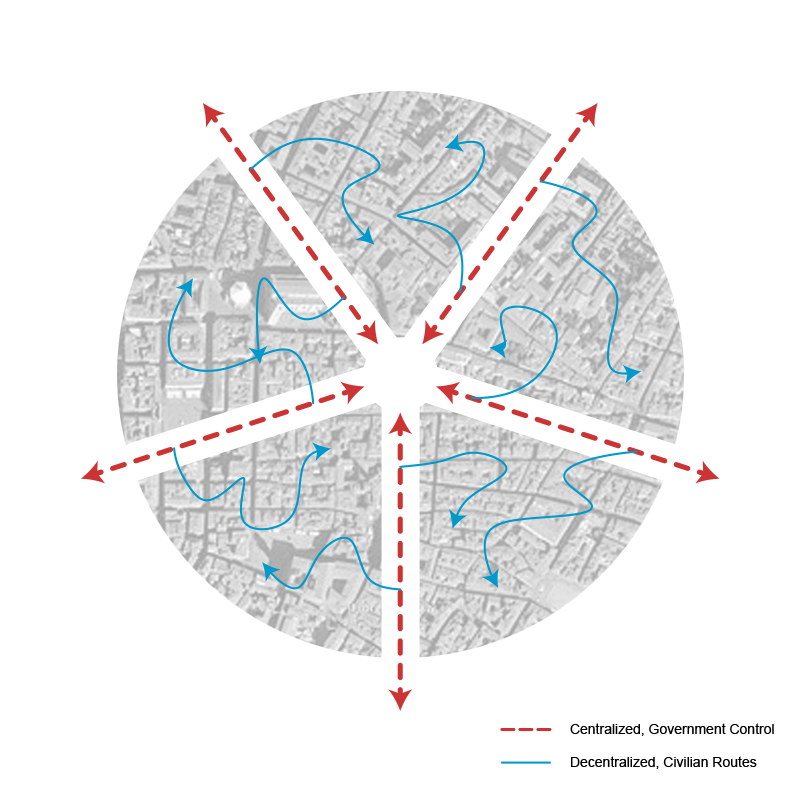 This diagram shows a city plan of how the French occupation is portrayed through the central road systems in comparison to the city spaces in between, which showcases a more private space, where it has lots of twists and turns. These areas are showcased when the main protagonist Ali, runs away from police after assaulting a police officer in the main street.

Another point of interest is when they show clips of various FLN forces assassinating police officers on the street through the use of picking up the gun in a pre-hidden location, shooting the officer, then placing the gun back into the secret location. To me, this represented how the blockchain functions in terms of the anonymity, and how certain activities cannot be traced back to the original owner.

This picture below gives a great representation to what happens to the public in the centralized public road, where they get shot by government forces. They are at the mercy of the centralized power, where they no one to run, where they are unable to be traced. This can be contrast to a centralized company or system with their own guidelines constraining whatever audience that they are giving services to. 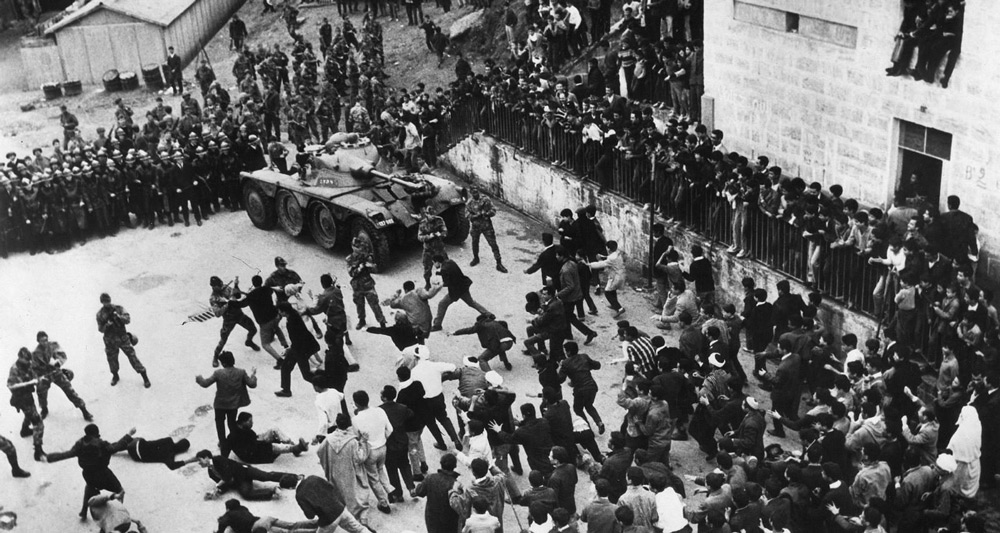 I find it interesting that true freedom comes at a cost. True freedom away from the government and anonymity allows for illegal activity to fester, so one has to consider the pros and cons when thinking about the infrastructure of the blockchain.

Contemplations in the midst of all these Pros and Cons

This was a great time for me to contemplate where I get this anxiety from. Even though I am already aware that there is a justification to establishing a position somewhere in the argument that I am addressing as long as I am aware of the other sides of the argument and points of conflict that might occur based on opposing views and perspectives. But somewhere in the back of my head, I have a hard time going forward when thinking about the consequences of choosing either side, as for this case, there are pros and cons to both giving that centralized power to the government versus having a society that is unable to be regulated by the government.

The goal is to establish neutrality in its purest form through the infrastructure of the internet. I assert that the internet should not be regulated by the government, because through the influence of the government, finding a general consensus is close to impossible. Through this true neutrality can a general consensus be made in the face of governance.

All clips are from the movie, Battle of Algiers